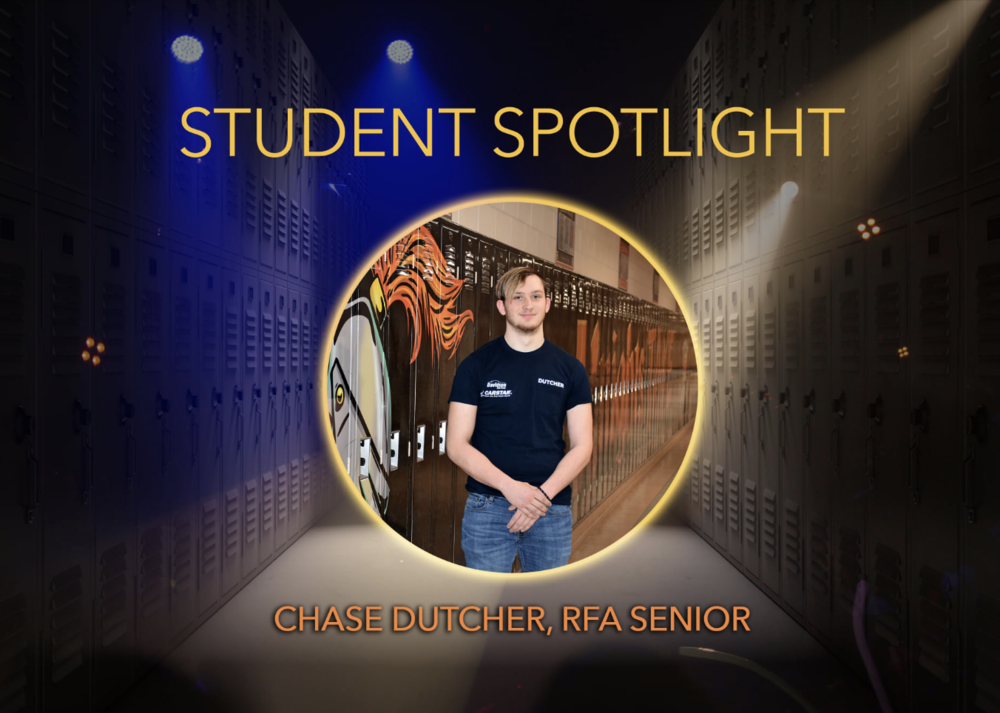 Chase Dutcher remembers clearly his parents and grandparents’ advice, “never quit,” and these two words have made a difference on his path throughout school and into his senior year.  Like so many kids he has had to deal with the pandemic and remote learning. “It was hard to get used to coming back to school because of everything being online. It was weird, but after a while I got used to it and stuck with it. I tried as hard as I could to keep my grades as high as possible. I never gave up,” said Dutcher.

Dutcher is a student in the RFA JROTC class with Master Sergeant Della Pray and Lt. Colonel Kevin Tracy. “JROTC helps you prepare for the real world. I’ve learned how to build a resume and there was a section on budgeting,” said Dutcher. He said his inspiration to work hard comes from Master Sergeant Della Pray and his wrestling coaches, Jerry Zehr and Robert Romeo. “They are always there to help out,” he said. “Chase joined JROTC last year when we were remote and hybrid, so he wasn't afforded the typical way we run the program as in uniform wear and hands on group leadership. Chase was in a freshman class and asked to be the commander of that class. He's done a great job and is a natural leader,” said Pray.

He also attends the MOBOCES CTE Autobody program and works part-time at Davidson in Rome. In addition, Dutcher is also on the RFA wrestling team and plays football and lacrosse.

His dad was a firefighter in the Floyd Volunteer Fire Department and helped save people. “I want to help people too,” said Dutcher. After graduation in June, Dutcher would like to enroll in the Fire Protection Technology program at Mohawk Valley Community College and then the Utica Fire Academy.

Chase lives in Rome with his parents Christopher and Krystal Irvin.

We wish Chase Dutcher and all the seniors the best on their journey after graduation!